The Allianz Climate Risk award acknowledges PhD students and early career postdocs whose research looks to reduce the risk of extreme events that are exacerbated by climate change. Emily achieved a place in the top 4 and after travelling to Munich to present her project on downscaling tropical cyclone (TC) rainfall with deep learning won the award. Well done Emily! 8th December 2022. 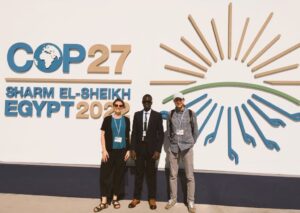 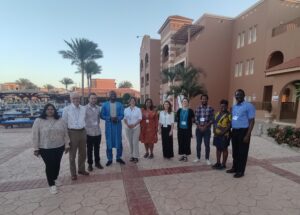 Rachel spoke to CNBC about how countries should address the impacts of climate change. Rachel also spoke to National Geographic for their article on who should pay the bill for climate disasters. 9th November 2022.

The University of Bristol has created a new Climate Change and Health research strand led jointly by the Cabot Institute for the Environment and the Elizabeth Blackwell Institute for Health Research. These four short videos briefly explain why this area of research is so important: Why look at this complex challenge? How we are working together
and A Healthier Future. 3rd November 2022. 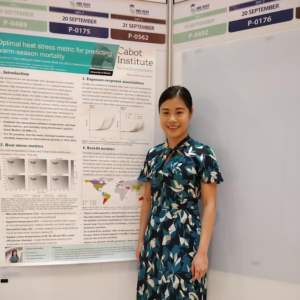 Vikki discusses China’s summer heat wave in the Washington Post and why this hot summer is one of the coolest of the rest of our lives n Scientific American. 8th September 2022.

Team media and interviews for August heatwave and droughts

The team have been interviewed by numerous media outlets and written further articles on the current heatwave. Downplaying the catastrophic health impact of heatwaves costs lives in the BMJ, how climate breakdown is supercharging toll of extreme weather article in the Guardian and Extreme heatwaves: surprising lessons from the record warmth in Nature. 10th August 2022. 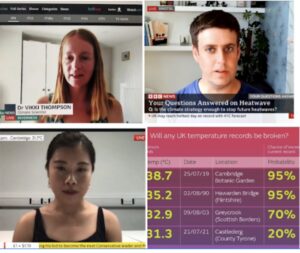 The group have engaged with over 50 interviews and blogs during the current heatwave in the UK. This includes Sky News, iNews, BBC News, The Guardian and Evening Standard. 20th July 2022.

Vikki said heatwaves were one of the deadliest hazards posed to humans and were linked to 3,000 deaths last year. Her comments were picked up by over 200 news outlets including The Guardian, The Telegraph, The Independent, The Times, Bloomberg, Bristol Post, and regional newspapers up and down the country. Vikki was also interviewed on BBC Radio 5. 21st June 2022.

Reality Check: Are the hottest cities in the world becoming uninhabitable thanks to climate change?

Congratulations to Eunice Lo and Hannah Bloomfield on their new fellowships!

Hannah talked to Euro News about powering up wind energy in a world of climate variability. 8th June 2022.

We had a great team turnout for the EGU in Vienna with Vikki Thompson and Hannah Bloomfield presenting in person and online talks from Peter Watson, Eunice Lo, Emily Vosper and Henry Addison. 5th June 2022. 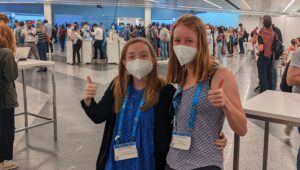 Tornadoes: Everything you need to know

Dann has written an article for BBC’s Science Focus magazine all about tornadoes! 16th May 2022.

Laurence Hawker, Dann Mitchell and Natalie Lord have written an article for The Conversation on super cyclones including discussion of cyclone Amphan in 2020. 16th May 2022.

Vikki’s new paper The 2021 western North America heat wave among the most extreme events ever recorded globally is published in Science Advances. The news was covered by over 200 outlets worldwide including The Conversation. 9th May 2022.

Dann is featured on The Met Office Mostly Weather podcast which was originally part of a Twitter spaces chat. 5th April 2022.

Storm Eunice has caused severe flooding and damage across parts of the UK. Dann spoke to Science Focus about whether climate change was responsible for the storm. Eunice was also interviewed on BBC Radio Bristol. 18th February 2022.

Climate change: US sea levels to rise as much in 30 years as in previous hundred, study warns

In a recent Sky News article, group member Vikki Thompson said the UK was “likely to experience as much sea level rise as occurred in the last century in the next 30 years, and this will lead to an increase in coastal flooding”. 16th February 2022.

What is going on at Jupiter’s poles?

Dann Mitchell and Emily Ball have created a climate model simulation based on the Wheel of Time book series, check it out! Have a read of simulating the climate of these books in The Conversation article. 14th January 2022.

The Conversation article  on Canada flooding after summer heatwave

Vikki has written an article for The Conversation about ‘Canada’s flood havoc after summer heatwave shows how climate disasters combine to do extra damage‘. 19th November 2021.

Dann was on the panel and presented ‘Temperature-related hazards in a warmer world’ at COP26 in Glasgow today in a a Met Office COP26 science pavilion event. Watch it here. 10th November 2021.

Eunice has written an impact report about how alumni donations have been used in this University of Bristol Alumni blog. 3rd November 2021.

Dann was recently invited to be on a Q&A panel to discuss climate change hosted by Prince Charles at the COP26 in Glasgow. 2nd November 2021.

Cabot blog about violence and mental health in a warming world

Dann and Vikki have contributed to a Cabot blog on ‘Violence and mental health are likely to get worse in a warming world’. 1st November 2021.

Hannah Bloomfield has written an article for  The Conversation about ‘What Europe’s exceptionally low winds mean for the future energy grid?‘ which links to the upcoming COP26 in Glasgow. 21st October 2021.

Eunice has been interviewed for Physics World ‘Getting physical with the climate crisis’. You can also hear Eunice discussing ‘COP26 special: extreme heat, cloud mysteries and climate tipping points’ in this Physics World podcast. 6th October 2021.

The roles of latent heating and dust in the structure and variability of the northern Martian polar vortex published in The Planetary Science Journal. 29th September 2021.

Both Dann and Eunice are interviewed as part of a series of podcasts for Cabot Conversations around climate change in the run up to COP26. Every episode features two experts from different disciplines, from across the Cabot Institute for the Environment and beyond, plus an artist who will be creating a stunning piece of art in real time as they listen to the podcast. 24th August – Climate Emergency featuring Dame Julia Slingo, Dr Dann Mitchell and artist Chi Yien Snow. 7th September – Heatwaves and Health featuring Dr Eunice Lo, Professor Richard Morris and artist Queenie Fleur Maidment-Otlet. 18th August 2021.

Dann and Eunice both contributed to Chapter 3 – Human influence on the climate system. For further information have a read on the Cabot blog. 9th August 2021.

Dann was interviewed by Channel 4 News today and the story was also included in ITV News, The Guardian, Daily Mail and The Independent. 3rd August 2021.

Vikki Thompson blogs about Heatwaves & Health on behalf of RMetS

Vikki Thompson talks to the Science Council about heatwaves in the UK. 3rd August 2021.

Vikki was quoted in the Guardian this week discussing climate change and the need to reduce global emissions.  26th July 2021.

Vikki was quoted in the BBC today discussing eco-friendly tips to stay cool in a heatwave. This was also featured in The Guardian and on Yahoo – have a read! 21st July 2021.

Dann’s new paper ‘Climate attribution of heat mortality‘ published in Nature Climate Change showing that one in three deaths are related to global warming, was reported widely in the UK and internationally, appearing in over 600 titles. Highlights include the New York Times, Der Spiegel, MSN US, The Guardian, Mail Online, Orange , La Nacion, El Tiempo and The i. 3rd June 2021.

Dann has been awarded a Turing Fellowship to develop interdisciplinary links on climate change, health, and data science across the partnership. Congrats Dann! 29th March 2021.

Richard Hall interviewed on the Breakfast programme this morning discussing a Sudden Stratospheric Warming which occurred on the 5th January and may be related to cold extremes over North West Europe. 7th January 2021.

What are the three biggest challenges associated with climate change? Meeting participant wordcloud 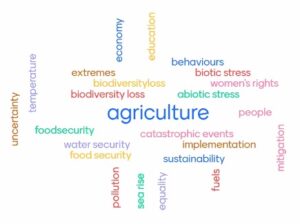 Eunice Lo organised our first collaboration meeting between The University of Bristol and The Met Office as part of our newly awarded academic partnership. The theme was ‘Taking Weather and Climate through to Human Health’. 22nd October 2020. 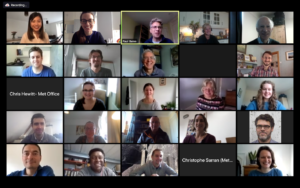 Eunice and Dann have written a guest post in Carbon Brief –  How ‘urban heat islands’ will intensify heatwaves in UK cities. 2nd October 2020.

Emily Vosper’s research on future hurricane projections in the news

Devastating hurricanes could be up to five times more likely in the Caribbean if tougher global warming targets are missed – Emily Vosper has been featured in international news articles during August in relation to Hurricane Laura for her work on future projections of hurricane rainfall in the Caribbean. 2nd September 2020.

PolicyBristol published new Bristol in Brief article on Extreme weather and their impacts under climate change written by Eunice Lo and Dann Mitchell. PolicyBristol aims to enhance the influence and impact of research from across the University of Bristol on policy and practice at the local, national and international level. 12th August 2020.

Mitigating hurricane risk in the Caribbean and beyond case study featured on The University of Bristol’s Cabot Institute for the Environment webpage. 12th August 2020.

Risk of 40C heat in the UK ‘rapidly increasing’

Dann Mitchell and Eunice Lo discuss the the chances of anywhere in the UK hitting 40C over the next decade in Carbon Brief. 30th June 2020.

BBC article on highest ever temperatures in Arctic Circle

Have a read of this BBC article about the Arctic Circle seeing it’s ‘highest-ever’ recorded temperatures with input from Dann Mitchell. 22nd June 2020.

Dann  discussed super Cyclone Amphan with Sky News, explaining the physics, impacts, and what we could expect in the future. Watch here. 26th May 2020.

Some of the team had a great time wine tasting last week and learnt about how climate change affects the wine production. Yes, it is important to know these things! 3rd October 2022. 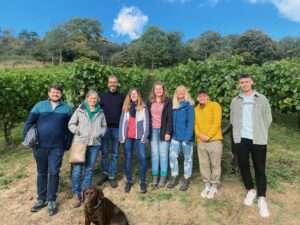 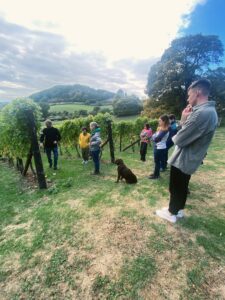 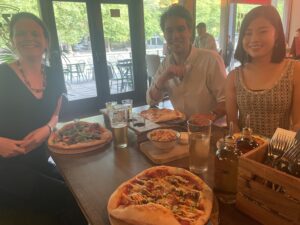 Great to have Evan de Schrijver for a week in Bristol, in prep for starting his fellowship with our group next year. Evan is an epidemiologist working on climate. Stay tuned for extreme climate and health. 25th August 2022. 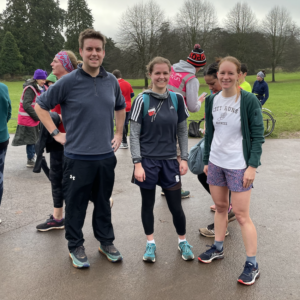 Super speedy – Dann, Emily B and Vikki ran at the Ashton Court Park Run. Very impressed with the early start on a weekend! 1st February 2022. 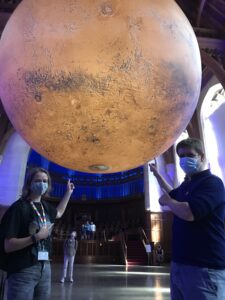 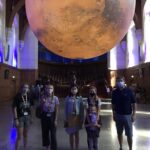 In an alternative to the usual Christmas night out we had a game session playing Among Us. Some good poker faces, being the imposter is way more fun! 10th December 2020.

Film Night – David Attenborough: A Life On Our Planet 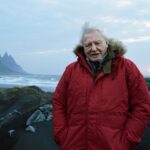 The team watched the documentary, David Attenborough: A Life On Our Planet. This was thought provoking and we would definitely recommend it!

The food choice was Mexican although sadly no churros but we did have some fine looking dishes: burritos, tacos, enchiladas and loaded nachos. 16th October 2020.

Film Night – Dolemite Is My Name

Our second group film night…Dolemite Is My Name and the food choice was Indian. Fun Times! 12th June 2020. 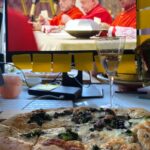 Our first ever virtual group outing. We randomly chose a team member to pick a Netflix film and someone else to suggest a cuisine that everyone had to cook. The winning film was The Two Popes and the food was Italian (Thanks Eunice and Emily B!). 8th May 2020.

Locked in a room 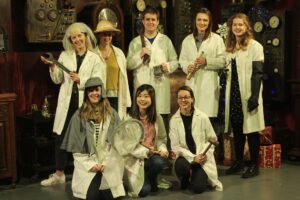 The team ‘competed’ against each other at the Harbourside escape rooms – we won’t name the losing team as it’s the taking part that matters :). 16th December 2019.